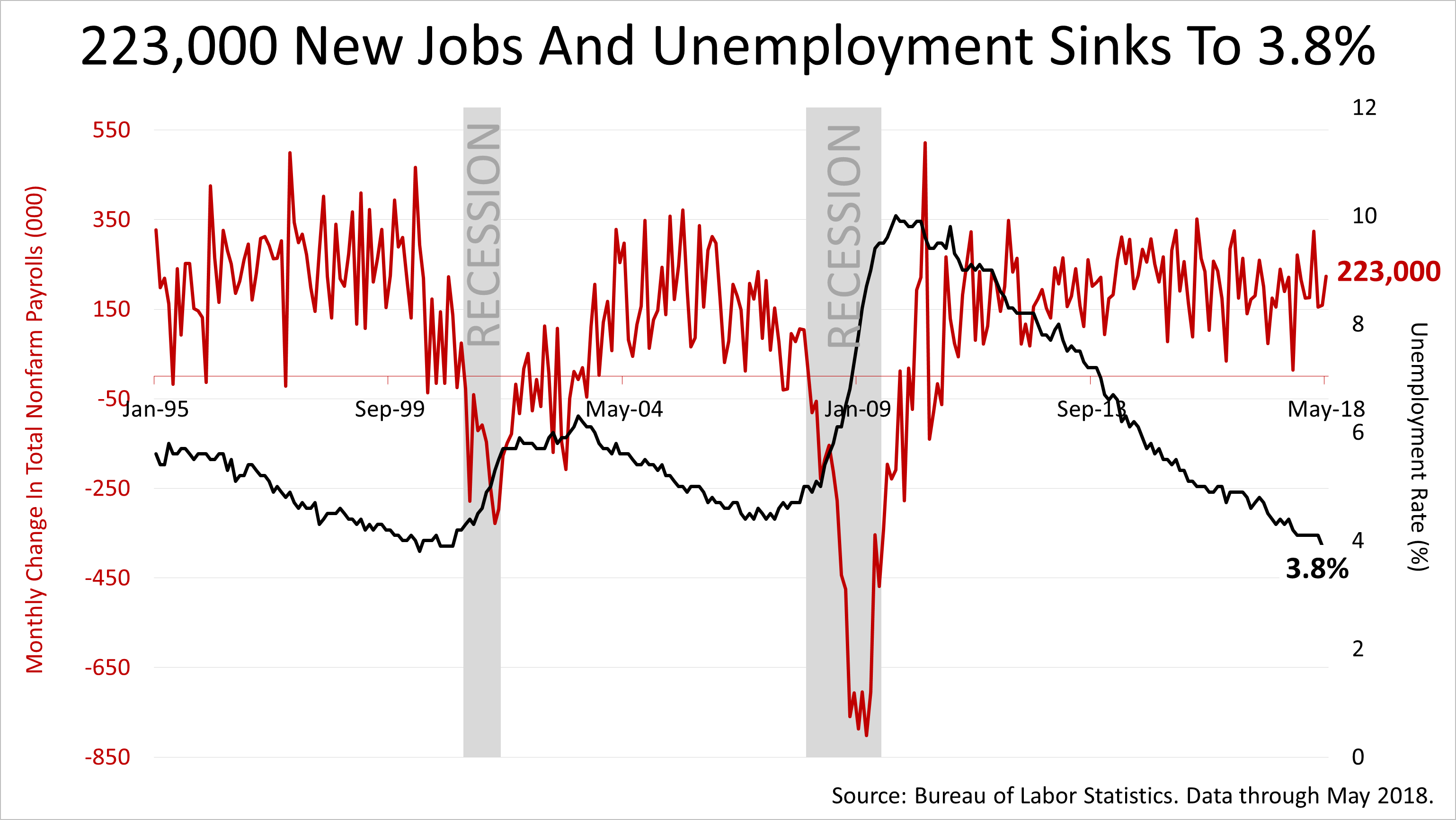 The favorable jobs data released on Friday morning followed reports earlier in the week portending sustainable economic growth in the months ahead. 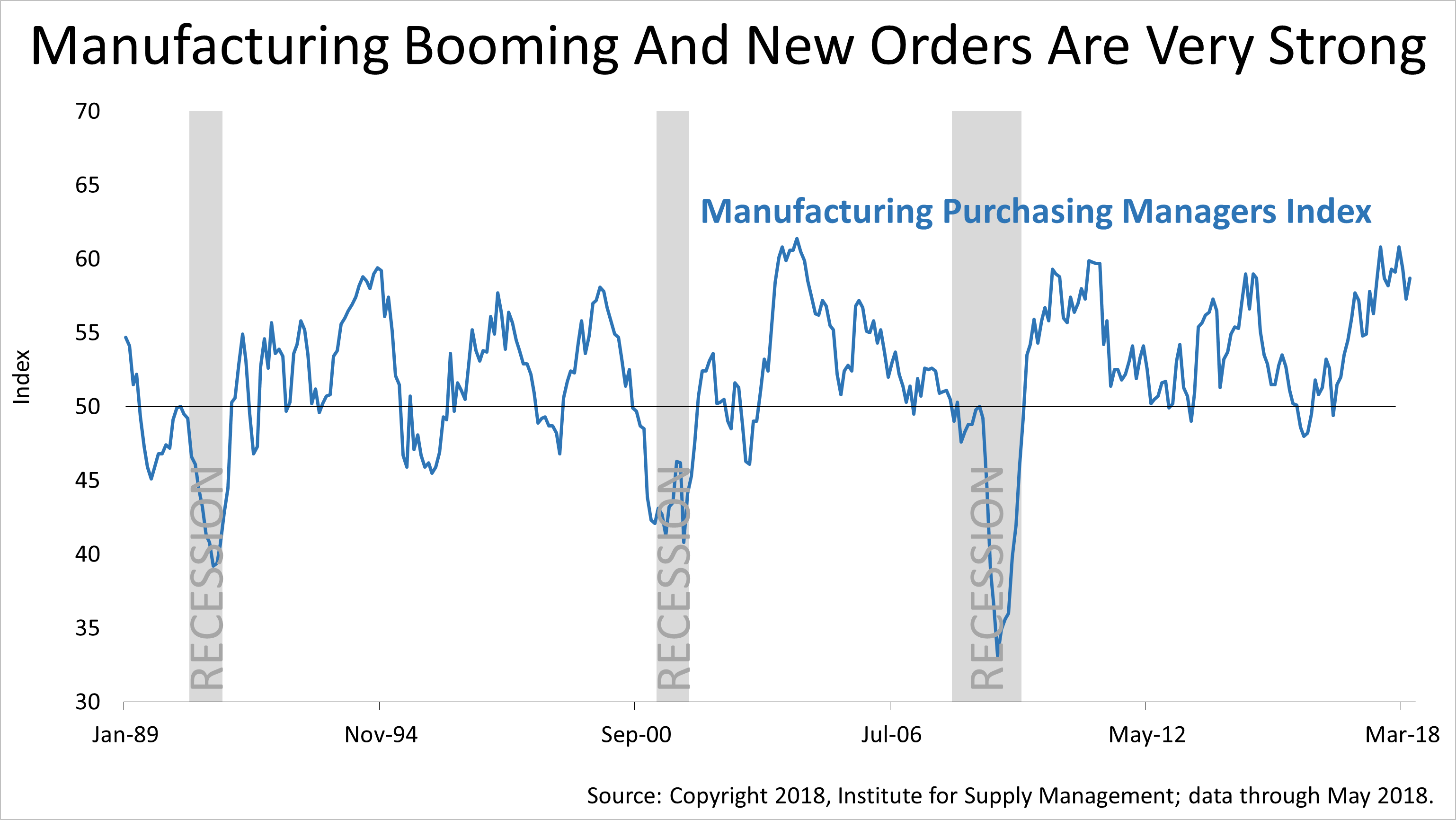 Manufacturing is booming and the outlook immediately ahead is bright.


The manufacturing purchasing managers index, in the past, dropped below 50 right before a recession hits. While May's reading of 58.7 was off from record-highs of the past year, the latest numbers were strong and nowhere near signaling a slowdown.

Meanwhile, new orders coming into manufacturers, which are not shown here, soared last month to 63.7, according to the Institute for Supply Management. That's a booming level for manufacturing, which accounts for about 12% of the total economy in the U.S., and the new orders index is a forward-looking benchmark of what's to come in the weeks immediately ahead. 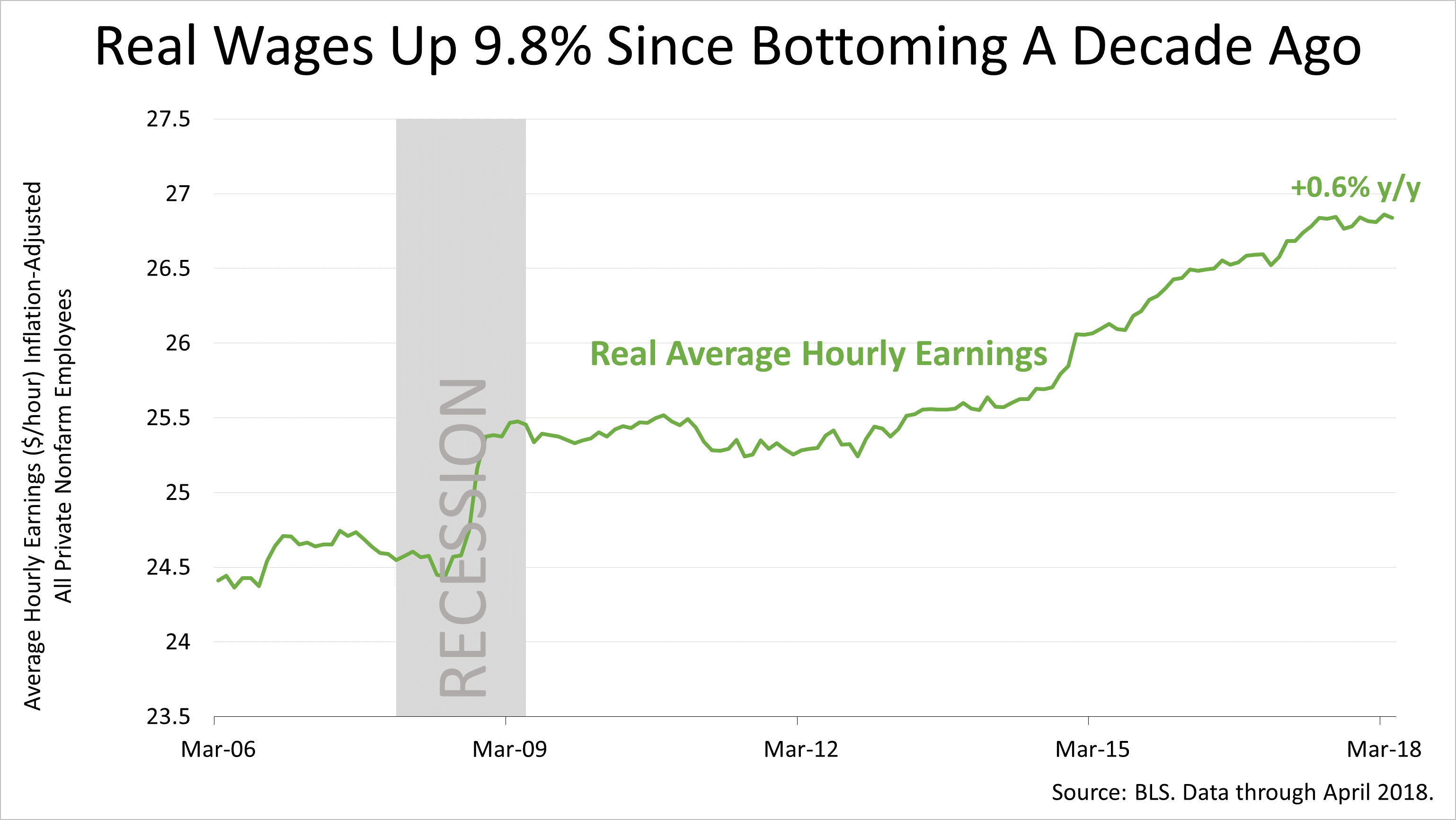 After inflation, real wages gained a modest 0.6% in the 12-months through April. That growth in real wages has leveled off in recent months. However, since the low point in wage growth back in July of 2008 amid the nadir of The Great Recession, U.S. workers have received a 9.8% rise in real wages. That's a real improvement in the standard of living for U.S. wage earners, a fact ignored in the financial press.

Politicians and financial pundits on TV constantly say Americans are not better off than a decade ago or two, but it's simply untrue. Real wages have been growing for over four years. 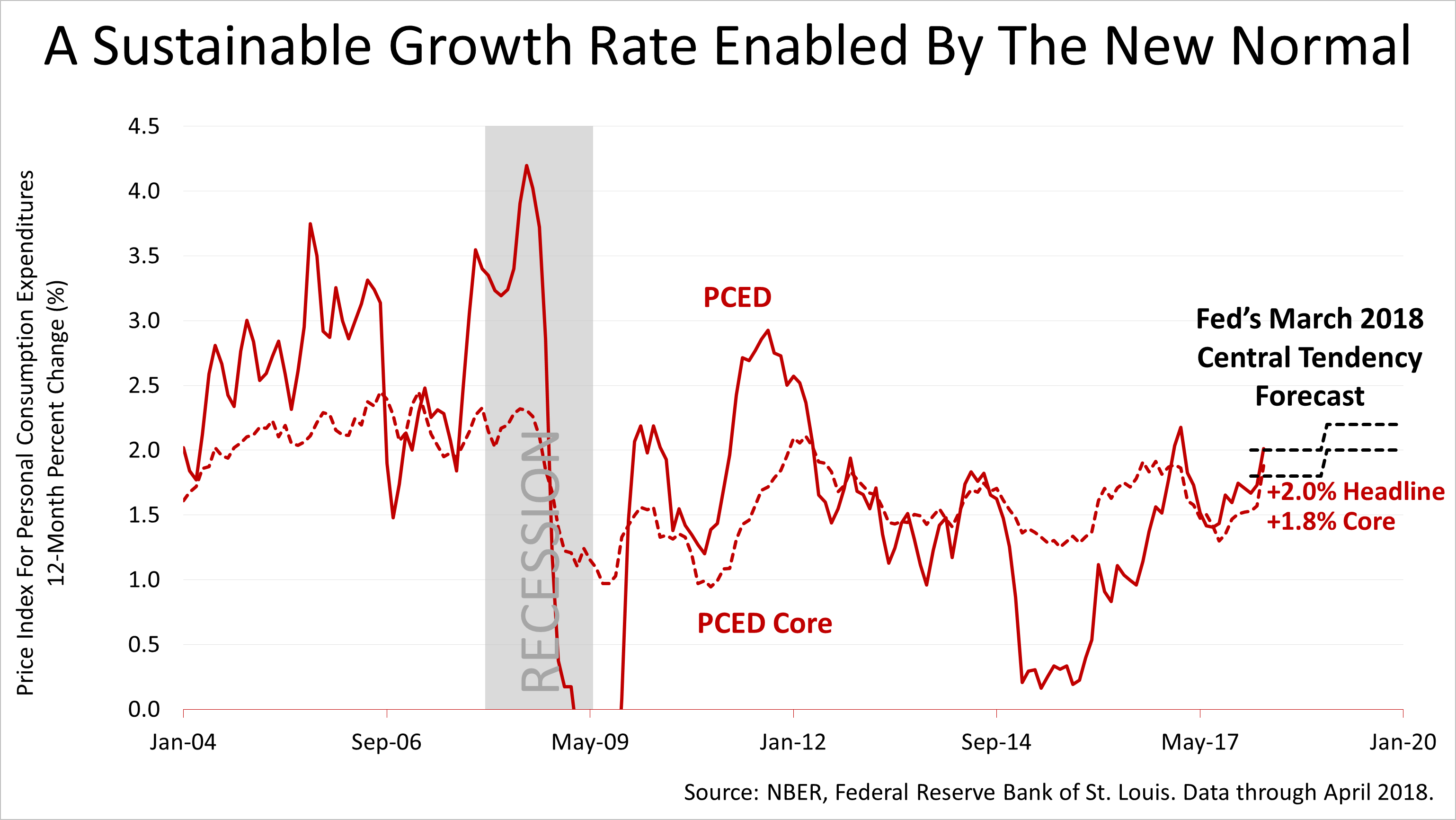 New inflation data released last week was also good. The Personal Consumption Expense Deflator (PCED), an inflation index used in setting interest rate policy by the Federal Reserve, showed inflation is behaving as expected. Despite strong growth, inflation has edged higher in recent months, but not by much.


With inflation remaining stable, the Fed is less likely to raise rates and quash growth, which puts the economy on a sustainable growth pace. 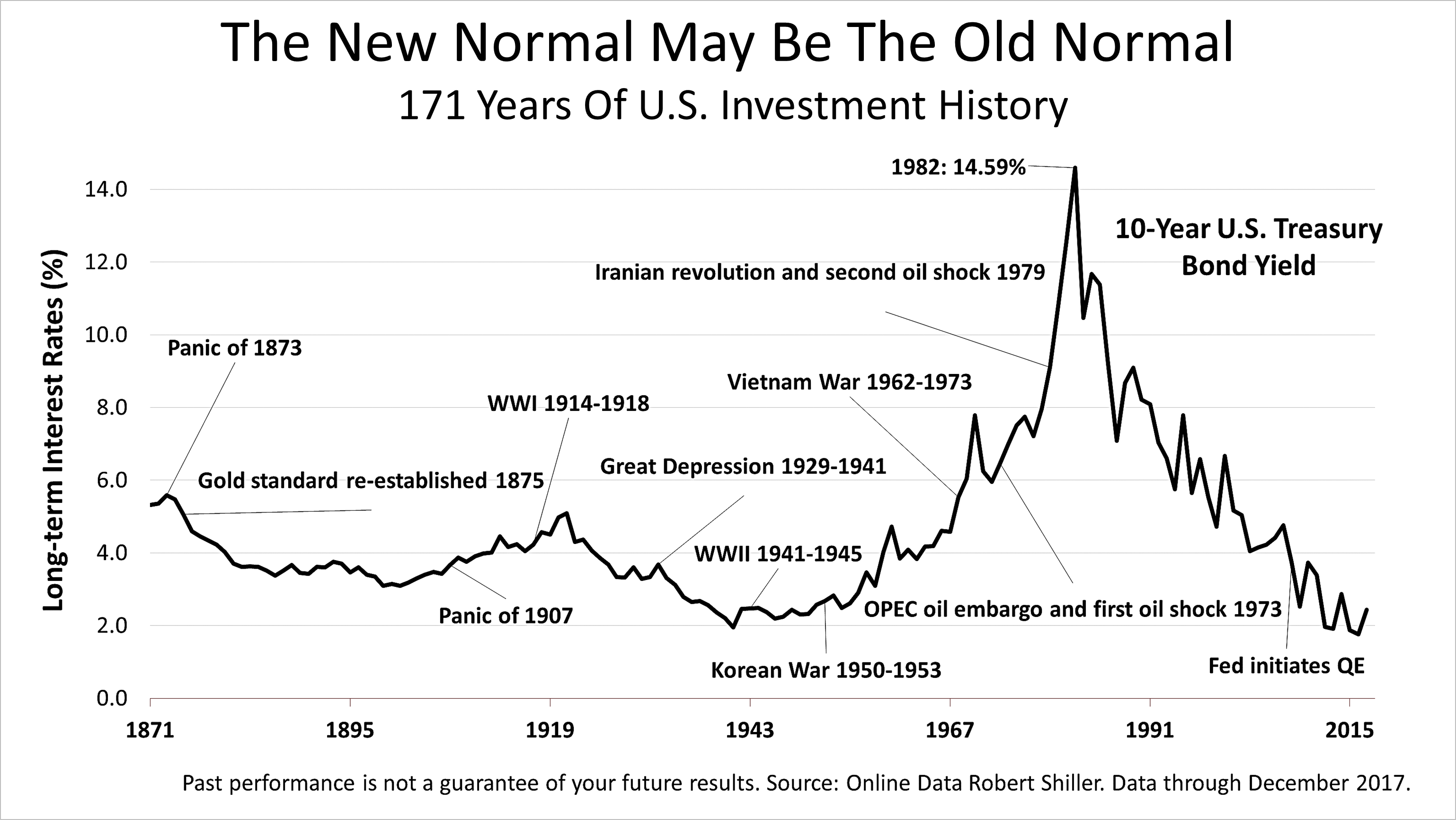 Apart from the aberration of the 1970s and 1980s, the "normal" rate of a 10-year Treasury Bond for many decades was just under 4% and at about a 2% inflation rate. The "new normal" - what's expected by the Fed - is actually the "old normal."

Expecting interest rates to be low and mild inflation is not what baby boomers have been trained to expect. But it's what the Fed expects. The Fed's low-inflation and moderate growth forecast makes the Fed less likely to put the brakes on the economy, making current economic growth sustainable. 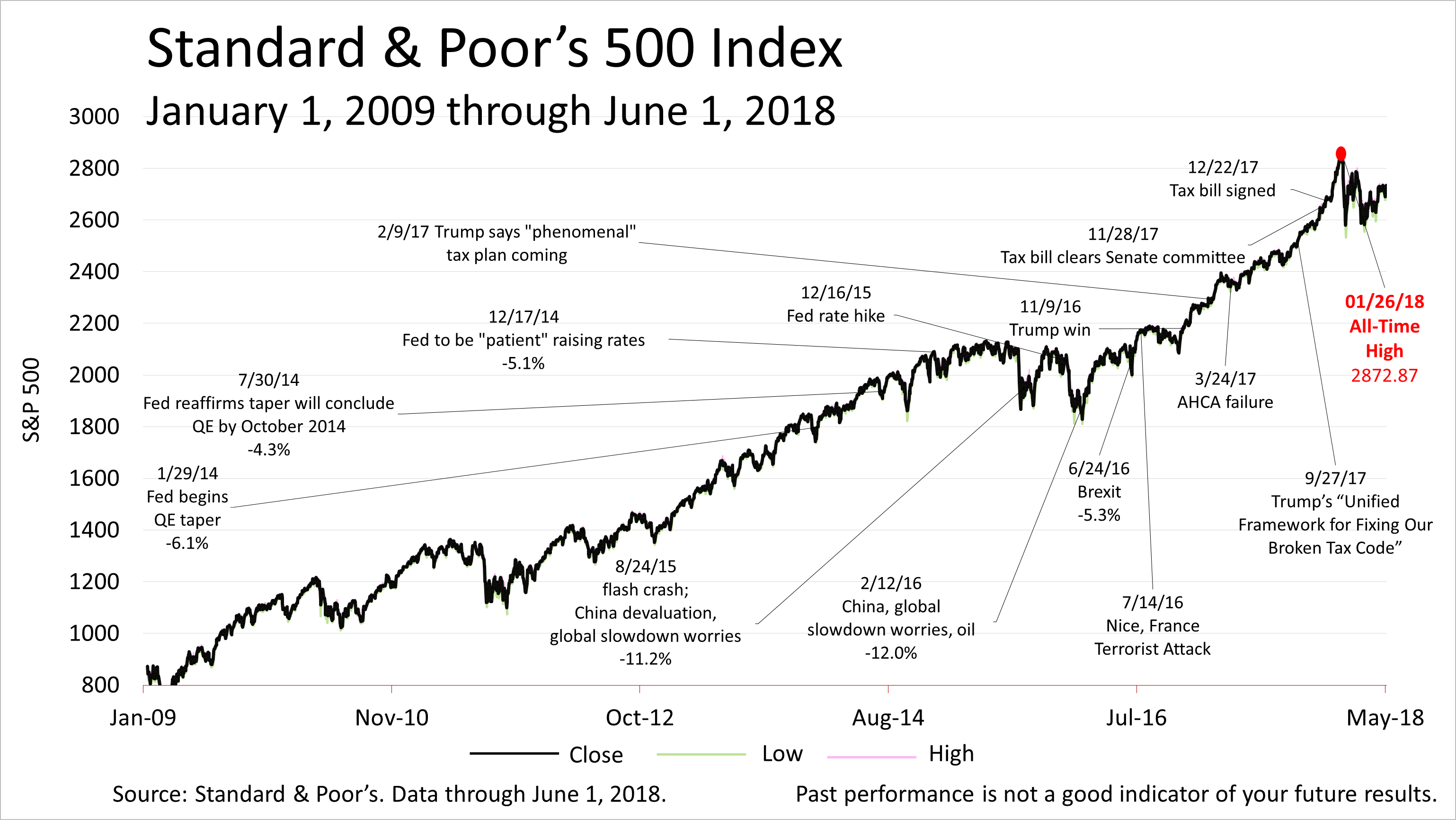 The Standard & Poor's index of America's 500 largest publicly-held companies on Friday climbed about 1%, to close at 2734.62. Stock prices were just 5% from their all-time closing high on March 26, as the nine-year-old expansion - the second-longest in modern U.S. history - and the sustainable growth pace buoyed investors' hopes for the future.

This article was written by a veteran financial journalist based on data compiled and analyzed by independent economist, Fritz Meyer. While these are sources we believe to be reliable, the information is not intended to be used as financial advice without consulting a professional about your personal situation. Indices are unmanaged and not available for direct investment. Investments with higher return potential carry greater risk for loss. Past performance is not an indicator of your future results.