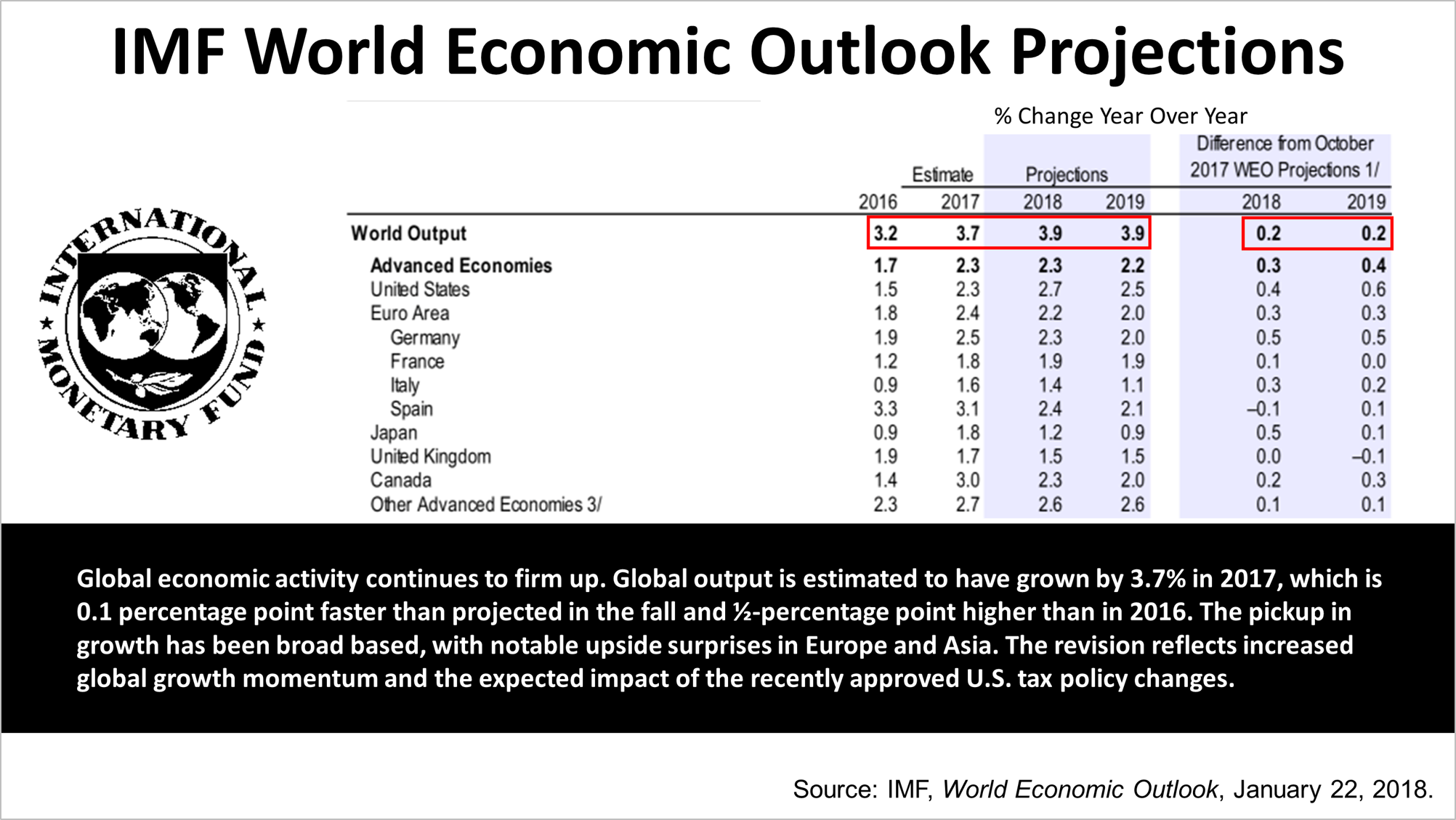 In news affecting your wealth, the International Monetary Fund (IMF) released its quarterly world economic outlook on January 22 and said that global expansion is strengthening. Timed for release at the Davos economic summit, the latest IMF forecast projects global growth will rise to 3.6% in 2017 and 3.7% in 2018. That represents an upward revision to an accelerating world economy. In upping its forecast for the world growth rate by 0.2% in 2018 and again in 2019, the IMF said world growth was broad-based and cited the change in U.S. tax laws as a main cause. 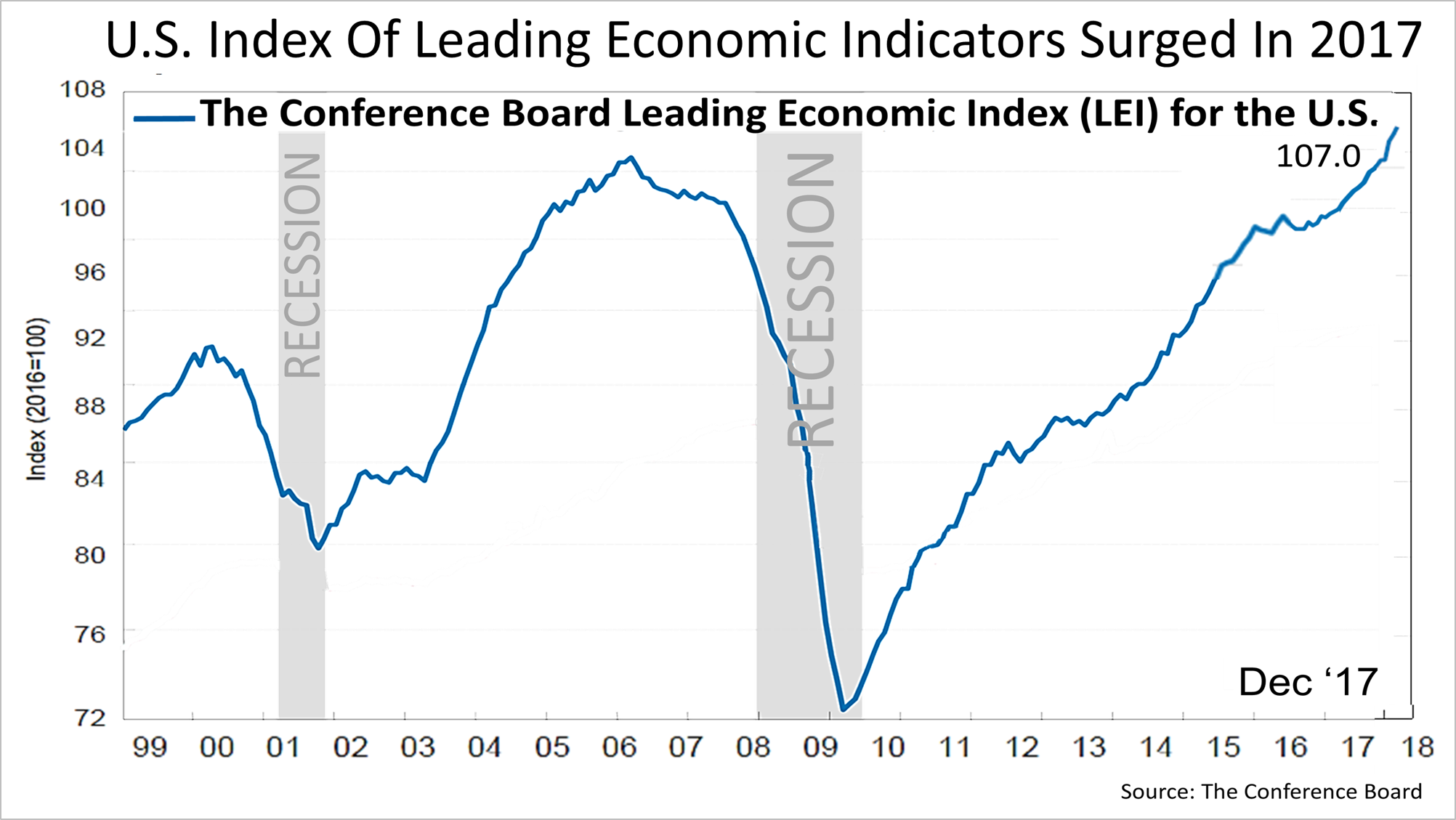 "The U.S. LEI continued rising rapidly in December, pointing to a continuation of strong economic growth in the first half of 2018," said the Conference Board's economic analysis team. "The passing of the tax plan is likely to provide even more tailwind to the current expansion. The gains among the leading indicators have been widespread, with most of the strength concentrated in new orders in manufacturing, consumers' outlook on the economy, improving stock markets and financial conditions." 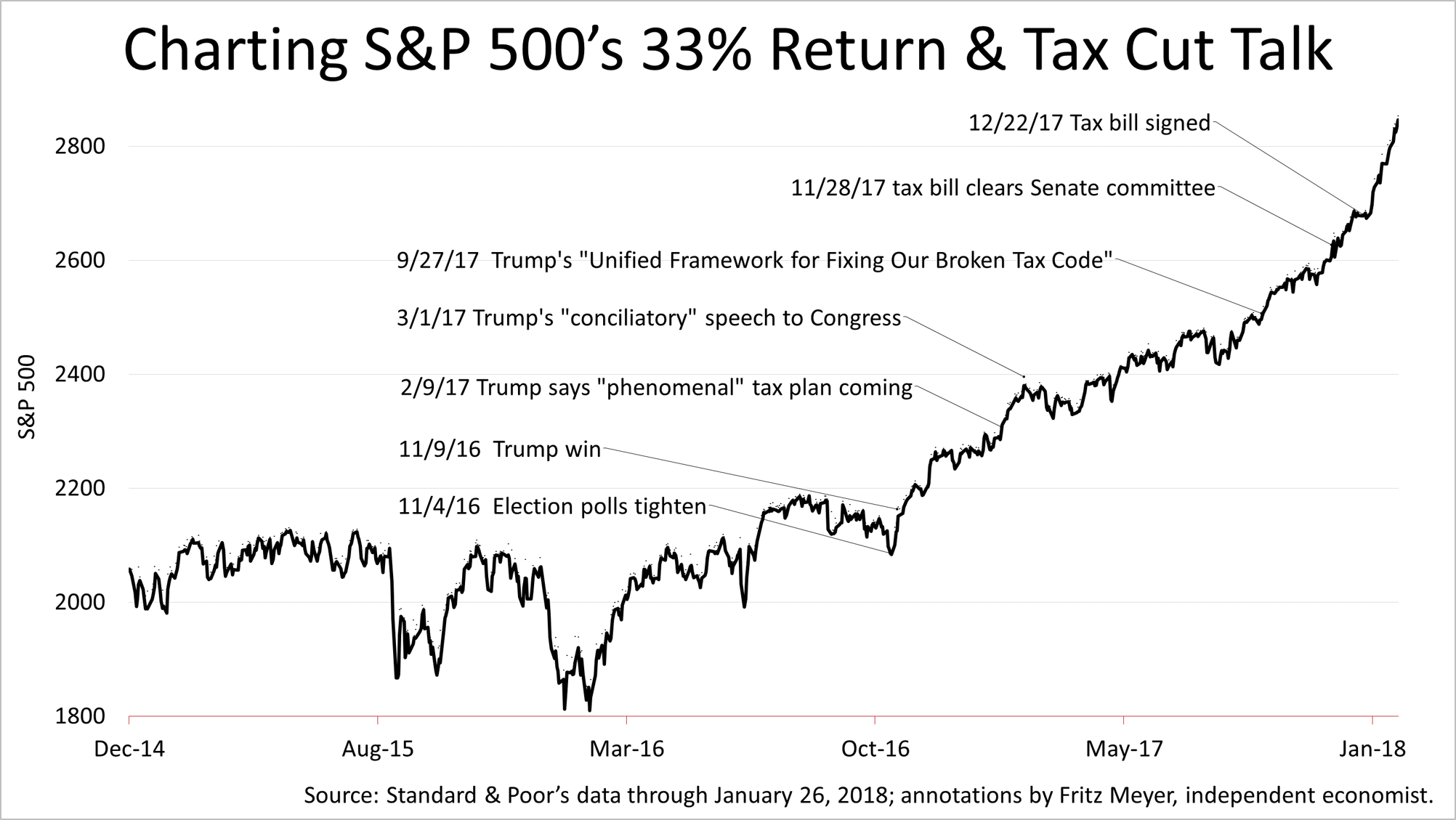 After almost two years of moving sideways in 2015 and 2016 - with two stunning plunges along the way - the S&P 500 broke out of that range after the November 2016 election. The new tax law has been a key driver in the current leg of the bull market. Every time news broke about the tax cut moving ahead, stocks got a bump up. The index climbed 33% since the election and surged just 6% since the new tax law was enacted at the end of the year. What is becoming more evident is just how much of a game changer the tax law is. 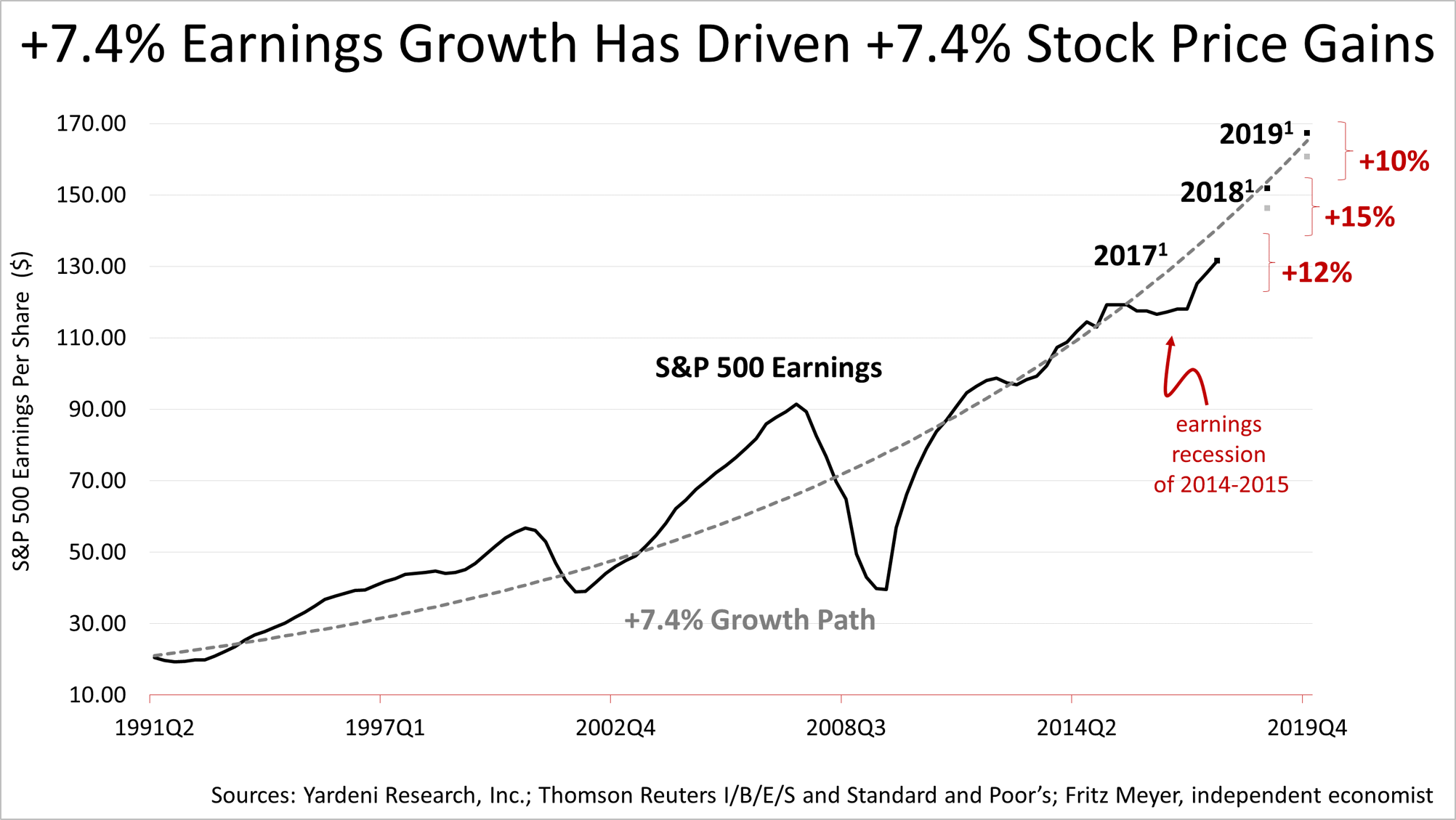 Earnings estimates have been rising in recent weeks as analysts are beginning to figure out how the new law affects profits at the publicly-held companies. Earnings are ultimately what drives stocks.


Since 2001, earnings on large-company stocks have been on their longstanding growth trajectory of 7.4% annually and that has driven gains of 7.4% annually. But earnings are not expected to grow a mere 7.4% annually in 2017, 2018, and 2019, but by 12%, 15% and 10% respectively. That's the latest estimate from Wall Street analysts and it's up significantly from just a few weeks ago.

As analysts continue to assess the impact on companies, the earnings growth figures are continuing to grow. To be clear, after the new tax law was signed, the average company in the S&P 500 was expected to see profits of $131 a share in 2018 but that has been revised to about $155 and that could be boosted again in the weeks ahead. The earnings surge is unusual but not without precedent. It is not uncommon for a surge in earnings of this magnitude to occur coming out of recession, as has happened after The Great Recession of 2008. Although it's unusual that earnings are surging after eight-and-a-half years of expansion, this, too, has happened in recent history - for example, in the months before the end of the decade-long expansion of the 1990s. Which begs the question: How long it can last? 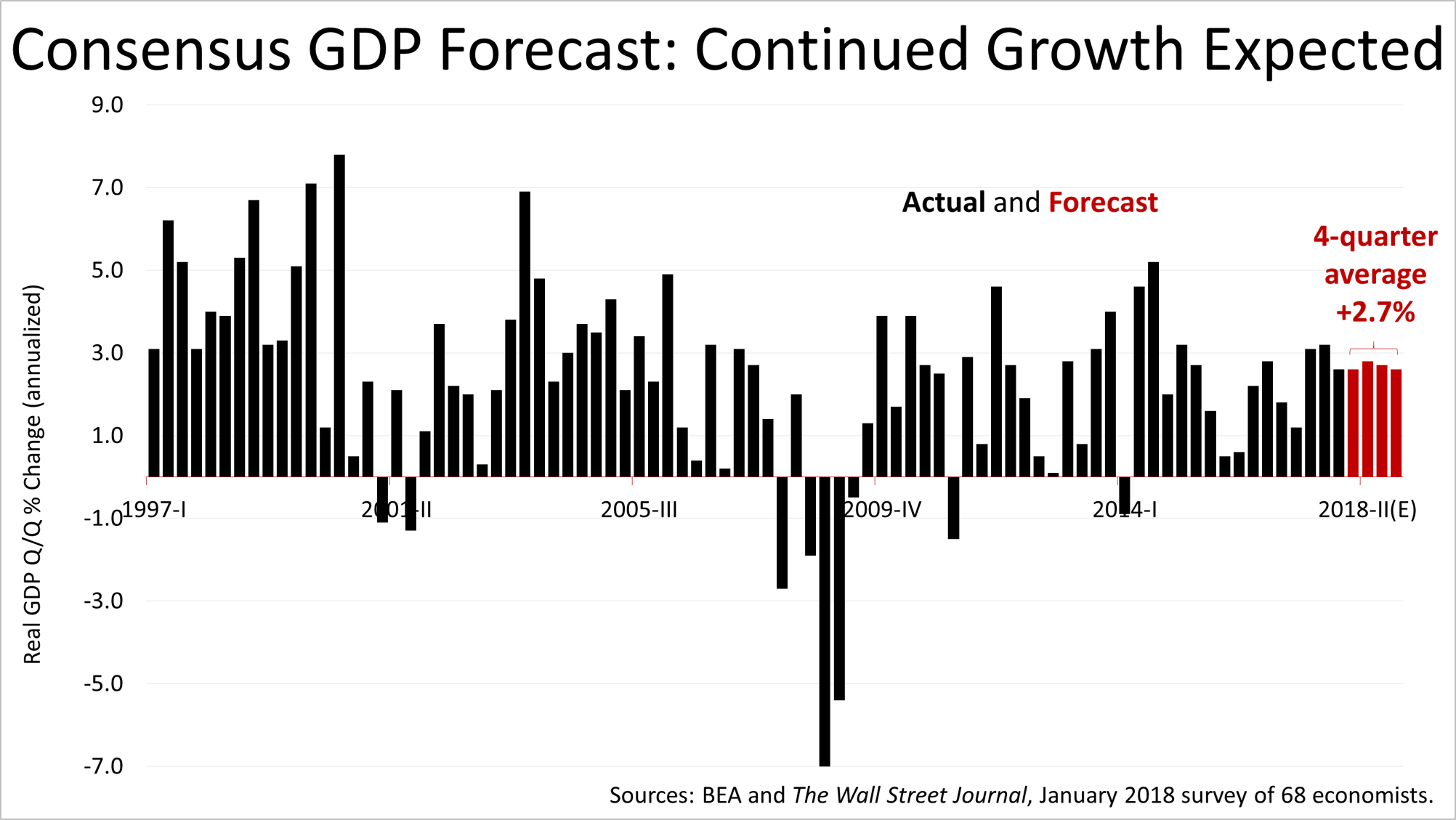 The consensus of 68 economists surveyed in early January by The Wall Street Journal was for a 2.7% average GDP growth rate over the four quarters ahead. That's strong growth. 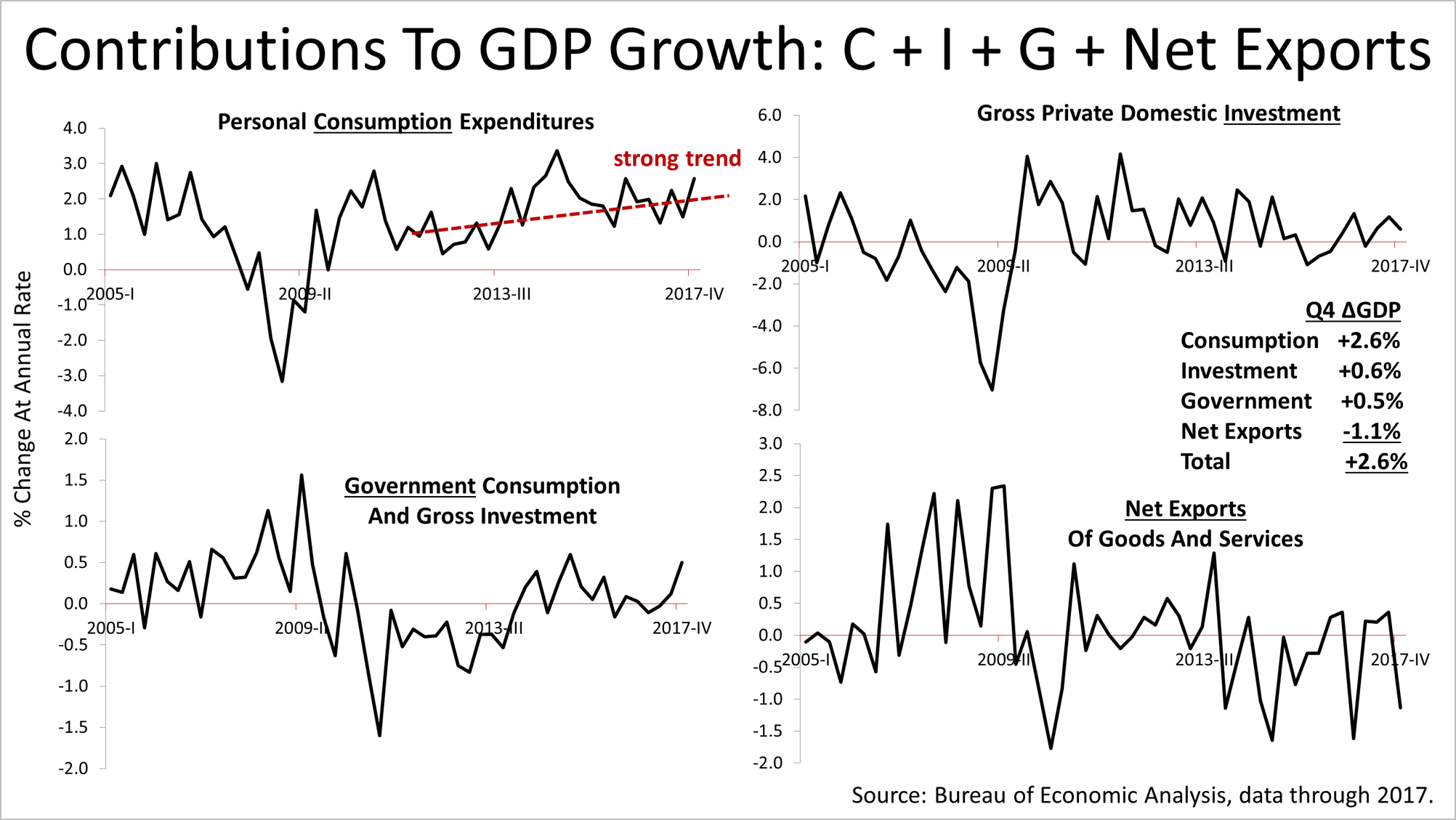 The week closed January 26 with the Friday morning release by the Bureau Of Economic Analysis of the U.S. Gross Domestic Product, and the U.S. grew 2.6% in the fourth quarter, but fell short of expectations of 2.9% growth.


On Friday morning, the financial media was reporting the figure was a disappointment. But behind the headline GDP figure, consumer expenditures stayed strong.


GDP is comprised of four factors shown in this chart and consumer spending is by far the most important, accounting for 69% of U.S. economic activity. The GDP growth figure was dragged down by net exports, but such dips are often temporary and net exports are volatile month to month. The important trend was continued consumer strength. 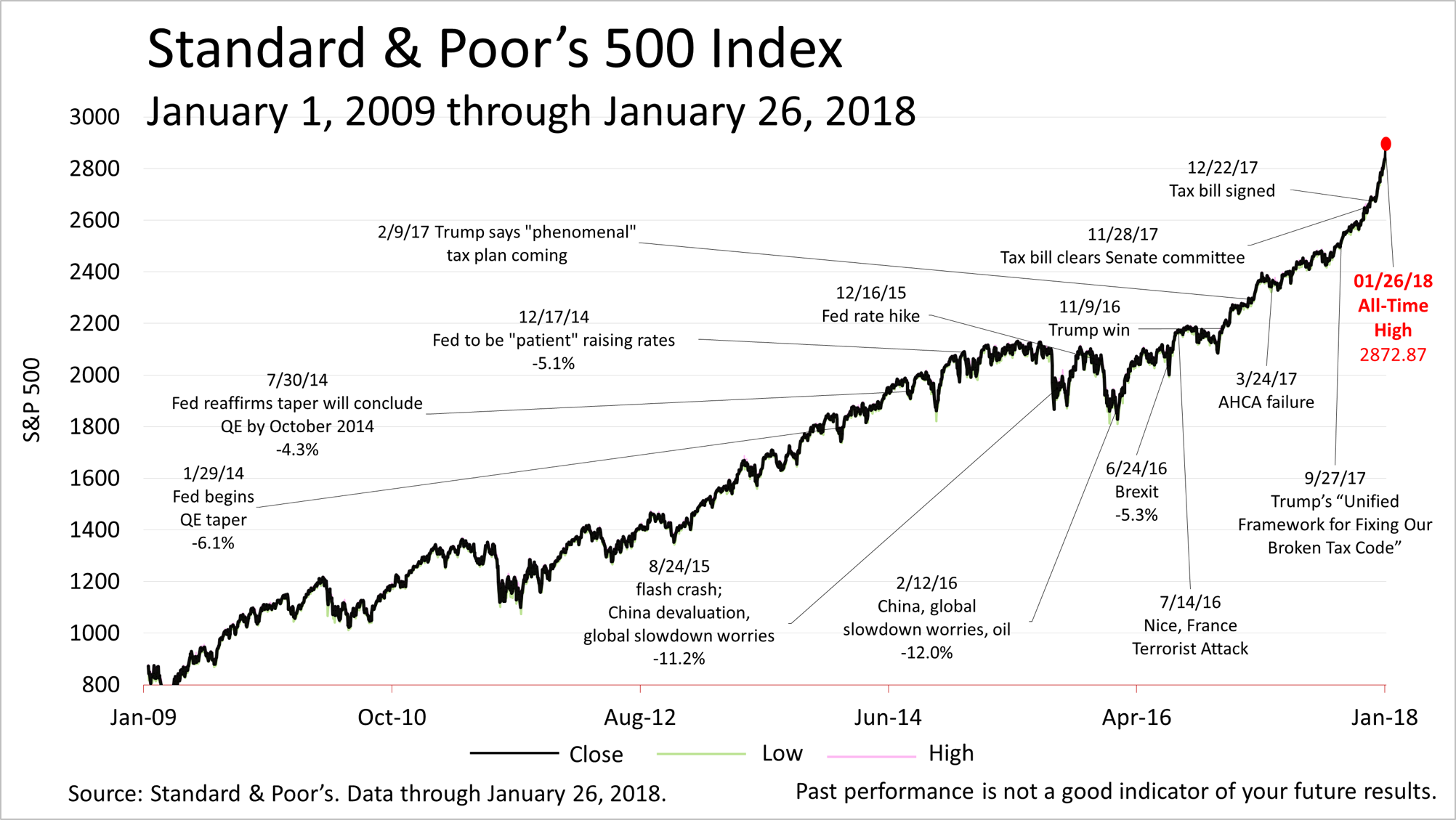 Despite the possibility of a constitutional crisis, a nuclear standoff with North Korea, and disappointment with the latest economic growth figures, Wall Street closed the week on Friday by breaking yet another all-time high in the Standard & Poor's 500 stock index, closing at 2872.87.

Investors could suddenly turn their focus to the $19 trillion U.S. debt and the nation's unsustainable fiscal path, so a 10% or 15% drop could occur in a flash at any time. The chance of a bear market decline of 20% or more increases as the eight-and-a-half-year bull market grows older, and the new tax law increases the chance the Federal Reserve will make an interest-rate policy mistake by quashing growth or allowing the economy to overheat and inflation to surge. Fed mistakes caused every recession in post-World War II history.

However, earnings drives stocks and earnings are surging. Consumers are spending and, with no sign of a recession and all major economic indicators signaling growth, the bull market and expansion could continue for months and head much higher.